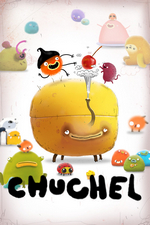 Chuchel is a comedy 3rd person puzzle game from Amanita Design. It is divided into 30 levels, which can be individually replayed at any time, featuring the titular Chuchel and his companion Kekel. There are 7 Steam Achievements, all documented in the walkthrough below.

Start by clicking on random things a total of 7 times to attempt to wake the sleeping Chuchel Good Morning. Now click on the water-drinking creature at the top of the screen twice to finally wake Chuchel up.

Walk towards the cherry, but a small creature will push it away from you. Keep walking to the right until you appear on the very left of the screen, then grab the cherry.

Try pulling the tree, then run up the tree and you will successfully bring the whole thing down.

Select any of the 3 birds to ride, then beat a series of screens where you press the mouse button to go up and release the mouse button to go down. You cannot die, and just bounce off most enemies. If you go off the top of the screen you start the screen again. There is only 1 tricky screen with a line of green enemies where you must get sucked in by the top one to succeed.

Try to grab the cherry.

Click on the snail and select the strength pill as your reward, then turn the crank.

Shake the orange tree, then go right. Shake the red, blue and green trees as well - there should now be 4 different colored fruits on the ground, and you can replenish their stocks by shaking the trees again. Try eating each of these fruits:

Click on the jelly creature until it eats the cherry. Go to the far left to return on the right side of the screen, then enter the jelly monster to get to the cherry.

Drag the spoon around to hit the egg. Keep doing this until it eventually fully breaks and you run to the right automatically.

Click on Chuchel 8 times to make him stop singing, then twice more to complete the level.

Jump into the left robot. Move left and right using your keyboard (A and D keys) and punch by clicking on the robot's gloves. Knock down the enemy 4 times to win the battle.

Turn on the radio, change the music, and try to move it. Make sure that you turn the radio back off. Try to take the cherry, and try to move the stand on which it lies. Take the jester's hat from the mirror and the scene will change. Interact with the mushroom and the cactus in both ways (just keep clicking on Chuchel to escape from the mushroom-induced trip).

Next pick up the winter hat from the mirror and the scene will change again. Push the penguin ball to the left. Interact with the snowman and the icicle in both ways. Put your normal hat back on.

Have a shower on the right. Drink from the shower then quickly switch to the jester's hat. Pee on the mushroom to make it grow. Press the red button on the right 3 times Three Caps. Put your normal hat back on.

Turn on the radio, then wear the jester's hat once more. Wait here until the spiky cherry falls to the ground. Try to pick it up, then put your normal hat back on.

Just repeatedly try to hit Kekel with the hammer.

Interact with the blue alien in every possible way until it leaves. Do the same with the pink alien. When the cherry is caught in the UFO's beam, try everything to get it back.

Shoot up into the sky (not directly at the balloon) 7 times, and the balloon will go up further into the clouds.

Sing the bird to sleep, then try to take the cherry.

In this level you have 2 beakers into which Chuchel and Kekel have been placed. You can transform them into a total of 4 different creatures each, by giving either a red or blue pill, then a dark blue or light blue drink. You can then make them happy or angry by choosing the pink or blue potion. Create all 8 creatures in total Creature Maker. Once you have made the dog and cat as instructed by the pictures in the background, make them both angry to finish the level.

Click to jump over the various obstacles as you chase after the cherry.

Climb over the teeth to reach the next screen, then use the A and D keys to punch left and right to take out the tooth fighters. Next you must spin the large creature around using the A and D keys so that Chuchel and Kekel make their way to the cherry.

Select the snail race option and win the race by selecting different faster modes of transport to beat your opponent Snail Racing Champion. Play all of the other mini-games, then select the left arrow. Back inside the creature, take the right exit.