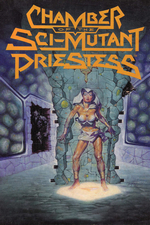 Chamber of the Sci-Mutant Priestess

Chamber of the Sci-Mutant Priestess is a puzzle-solving adventure set in a post-apocalyptic world. You play as Raven, a psionic mutant, who must defeat the evil Protozorq by using a combination of your wits and a range of psi-powers.

You will be given an object at the beginning of the game; this walkthrough will work regardless, as you don't need to complete any of the puzzle rooms that require those items.

Start by going to the Noose (through one of the west doors from the central chamber called the Master's Orbit). Use Solar Eyes to light up the room. Grab on to the left lower rope. Use Know Mind on the man here, then push the lever to kill him. Press the eye beneath the lever, then pass through the trap door on the right. Go forward, then take the left passage and go forward twice more to meet two more tuners. Accept, then tell the truth. Use Zone Scan, then lift the slab and take the flask. Go along the left passage to the end, then down through the trapdoor to the Refectory.

Head east twice, north twice and east into the room called Placating the Powers. Attack the first priest, then use Sci Shift to get the sacrificial blade, then Sci Shift again to get the mask. Use Brainwarp to clear Sci-Fi's mind, then give her your flask to drink. Now inspect the altar and push the lever on its right side to open it. Return west twice, east, west and north to the Refectory.

The puzzle rooms are now closed, so take the passage that leads to the Ring. Walk forward 4 times until you see a side passage off to the outside of the ring. Go along this, but don't go through to the Concourse, instead heading left twice to reach a bolted gate. Pull the bolt, then pass through the gate. Quickly use Sticky Fingers and climb up through the tunnel, and you will return to the Placating the Powers room through the open altar.

Now head west and south to the Threshold of Truth. Attack and kill the priestess, then put your egg in the opened mouth of the gargoyle. Inspect the lectern, then use Sci Shift to get the small statuette from on top of the left gargoyle. Go back out to the passage, then head east and west to Saura's Repose. Put your statue in the niche with the other statue, then put the monkey (on the floor) in the tunnel.

Go north to be In the Presence of God. Look at the picture of the stars and try to count them to have the passage open, then go through. Wait and 2 bad guys will appear. Use your Sci Power called Extreme Violence to kill one of them, then when the other takes Sci Fi and climbs on the ladder, use Brainwarp on him. Now use Sci Shift to close the trapdoor, then wait and he will release Sci Fi. Now throw your sacrificial blade at him to complete the game.