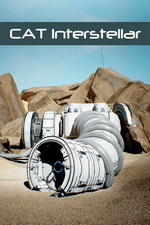 CAT Interstellar is a short science fiction adventure game inspired by Robert Heinlein's novel The Moon is a Harsh Mistress. You play as a DOG V4 Drone, a maintenance bot assisting in a terraforming effort on Mars. An updated version of the game was also subsequently released as CAT Interstellar: Recast. There are 18 Steam Achievements, all documented in the walkthrough below.

Just follow the corridors to Departures and approach the bank of terminals Beginnings. Select a chapter by clicking on one of the terminals.

Receive an achievement for starting Chapter 1 Waking Up. Leave your starting platform and go through the doors. Turn left, then go through the first doors on your left. Head downstairs, then through the server racks into a server room Server Room.

Go back out to the corridor and follow the arrows until they divide. There is a green monitor up on the left and arrows leading towards the Laboratory - head in that direction. Follow the corridors around and enter a garden. Go through to the room behind and talk to Android 520, who will give you your main mission information and activate your special sensor. Go back out to the garden and approach the grating on the left The Original Cat.

Head back to the room with the green monitor. Follow the arrows a short distance towards the elevator, then go right instead of following the arrows to the left (towards Android 39). Go through a partially open grating beneath the stairs on the left. Move the boxes around in here until you see the graffiti on the wall Chazz.

Now go back to the arrows and follow these to the broken set of doors. Use your grav lift to break the doors completely and make your way through. Go out on to the tracks at the station. Head all the way to the end and approach the car End Of The Road. Return to the platform and follow the arrows through to the elevator, then use the control panel inside.

Receive an achievement for starting Chapter 2 Is This Mars?. Just follow the passages on the ground floor and Android 341 will open the blast doors for you so that you can go outside. Turn to the right immediately, and follow the green markers until you reach the greenhouse Explorer.

Go back to the station, then follow the path directly away from it. Turn slightly right and follow the white tubing. Keep going up the hill and you will find a huge array of solar panels. Keep going in this direction and you will eventually be stopped by a glowing red force field Boundary. Head straight back to the solar panel array. On the left there is a collection of irregular stacked boulders - enter a small cave under here Overlook.

Exit the cave and look at the really tall elevator extending up into the sky - go to the base of this. Android 58 here will ask for your help locating a crate with some plutonium rods. Turn right and follow the trail that appears on the ground. Pick up the crate when you find it, and carry it back to the elevator. There are 2 potential achievements here, requiring 2 separate plays of this level to get them both:

Either way, talk to Android 58 again. As instructed, head towards the sun and you will come across an opening in the rocks to the left. Go through the doors into the elevator, then use the control panel inside.

Receive an achievement for starting Chapter 3 It's Android 42!!!. Talk to Android 42, then follow him through to the mine entrance and out on to a platform. After he stops walking, double back and use the first console to turn it from red to green. Double-thrust up to the central platform of the SkyLift, then go around to the left until you can see another red console. Jump along the pipes to reach the console, and use it to turn it green. While you are over here, head behind the waterfall and you will see a lake in a cave. Head out to the small island in the middle Ligh's Island. Pick up the lantern from the island and take it over to the 2 androids standing on the shore to the left Deliver The Light.

Go out to the SkyLift and find 2 more consoles coming off the sides. One of these consoles will only be revealed by you destroying some rocks directly in front of it. After all 4 consoles are green, go to the one that you needed to reveal by destroying rocks. Find a short set of steps next to this and stand on the rock at the top of the steps. Look towards the SkyLift Monterico's View.

Go back and talk to Android 42 again.

Receive an achievement for starting Chapter 4 Uh Oh. Go over to Android 42 and move the rock pinning him down. Turn around and break the rocks on the nearby wall, then go into the yellow cavern. Continue through a blue area and break down another large rock to find a much larger cavern on the other side.

After Android 42 shuts down a dying drone, keep going and you will eventually find a hole leading down much deeper. Follow the damp tunnels and you will spot another rock to break down. Let Android 42 examine another broken droid, then break through the wall to the left and find another drone beneath some glowing tubes. Turn left and keep following the paths - you will then find what appears to be a large stone carving of an alien. Follow the path all the way around the outside of this cavern. You will have to destroy two small carvings at the bottom to continue.

Go through a room with a flowing river and lots more glowing tubes. When Android 42 starts running, try to keep up and you will eventually be destroyed by a falling boulder.

Receive an achievement for starting Chapter 5 Meow Interstellar. Follow the corridors and jump on the computer keyboard when you see the man running away. Go straight ahead through the green tunnel, jump over some boxes to avoid the water, then continue all the way outside.