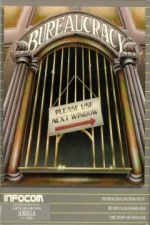 Bureaucracy is a classic text adventure game by Infocom. You play as a person who has just moved to a new apartment complex and falls victim to bureaucratic misadventures plaguing every facet of their life.

Walk north and west, then examine the software and ask the clerk about it - answer "yes" to the question. Examine the cart, then open the case and take the adventure. Give the adventure to the clerk. Now you can put the recipe cart in the case.

Go east and drop the bag, then go east again and wait. Answer the waitresses questions in any way you want, then wait and order again. Wait once more, then take the burger. Next walk south, west and north, then take the bag and eat the burger. Walk north and east, then knock on the door. Go south and give the stamp to the man, then take the mail - examine it and make sure you note what letter is printed on the postal service sticker.

Head north and west twice, and give the letter to the agent. Take the ticket. Walk east, south twice, east and south again. Examine the door then open it. Go west and listen multiple times, until you hear the macaw say something. Next head east, north, west and south, and examine the door again. Ring the doorbell. Go north, east, south, west and south, then take the painting and go north. Show the painting to the macaw. Take the mail - again examine it and note the letter on the sticker.

Go east, north, west and south twice. Read the notice. Open the mailbox, then look in it. Examine the trough. Open the the bag, then empty it into the mailbox. Now take the mail, and examine it to see the letter.

Answer the questions you are asked from the following list:

Examine the door, then try to cut the bar with the hacksaw. The weirdo will give you his Swiss army knife. Examine the knife, then press the button and pull the lever. Plug the power saw into the generator, then sit on the generator. Give the power saw to the weirdo, then sit on the generator again. Wait here several turns, then go north and up, and the paranoid guy and the weirdo should have left. Take the mail (examine it to see a letter again). Open the envelope, then read the memo and read the cheque (for -$75).

Walk south 4 times to reach your house, then west twice. Read the address book (the first page, then the last page) and call the cab company. Wait while you are put on hold, then go east twice and wait until the cab arrives (if it doesn't arrive, go back inside and call the company again, then go outside and wait). Try to enter the cab. Answer "yes" then show your passport. Enter the cab, then wait until you arrive at the airport. Pay the driver $17.50 and you will exit the cab.

Note: Don't worry if you lose your address book at the airport, you will get it back later. If you lose anything else, you will need to go to Lost and Found to collect it.

Head north twice to find that Omnia has been sold. Walk south twice, then go east until you find a sign that does not mention "Air Zalagasa". Go north twice. Wait 4 times, then give your ticket to the clerk. Say you want a direct flight, and you will receive a new ticket. Walk south and climb the pillar, then go up and examine the speaker. Pull the red and black wires, then connect red to black. Now open the grate and go up 4 times. Open the grate here, then go east. Tell the controllers to stop Flight 42. Go west, then down 6 times and you will end up in the airplane.

Sit in seat 3C. Take the safety card, then read it (notice a picture is missing). Take the headphones, then wear them and plug them in. Press the light button (which actually controls the recline). Take off the headphones and drop them. Now wait for the flight attendant to arrive, and get your meal (you will end up with llama stew no matter what you say). Do not eat the stew.

You will now be told there is a phone call for you. Stand up and go south 7 times, then pick up the phone. Answer "yes", "yes" and "no", then say "stinglai ka'abi" to the flight attendant and you will receive a parachute. Open the hatch, then lift the handle and pull it. Go east 3 times.

Wait until you see the attendant at the window, then knock on the window to get your strap free. Now pull the ripcord and wait.

Take off the parachute and you will fall into a cooking pot. Put the recipe cart in your computer and you will be free to go, and given your address book and an unlabeled cart.

Return east. Put the unlabeled cart in your computer. Type "?", then "CLEAR", "NOOZ". Now use the print commands in the order you found the postage stickers in the game. For example if you found them in the order C, D, E, B, then type "PRINTC", "PRINTD", "PRINTE", "PRINTB".

Read the message from top to bottom, left to right: "To find the entrance to Headquarters, upon entering the first numbered room, go in any direction. Thenceforth, subtract the number of the previous room from the number of the current room. Take the last digit of the difference. If it is zero, go East; if one, go South; if two, Up; if Three, North; if four, Down; if five, West. For example, the first numbered room is 64; the second is 105. The difference is 41, making the last digit one; you should go south in this case. Failure will return you to the antechamber."

Now type "QUIT" and head east into the Switchgear Rooms. Follow the instructions from the message to get through to the airlock. Put the key-card in the airlock slot, then open the door 5 times. Go north.

Walk west 3 times, then examine the left screen. Go west again and examine the computer. Read your address book (first page) - notice the first entry has changed. Connect the modular plug to the computer, then enter "RANDOM-Q-HACKER", "RAINBOW-TURTLE". Now type "?" to get a list of commands. Type "WHO" to see that 2 users are logged in, yourself and the nerd. Use "TYP" to view the contents of several of the .HAK files (importantly, view the DVH2.HAK file), then type "RUN" followed by "PLANE.EXE". This will have run a program that requests a plane to get you home later on.

Keep viewing files and you will eventually get a message that user RQH is about to use a certain file. Type "DEL", then that file that he was about to access. Next "REN", "DVH2.HAK", that file again. Use a few more random commands to waste time, then the nerd's computer will crash.

Go west and up, then wait twice and an airplane will come to collect you. Walk west, south twice and west, then read the letter.