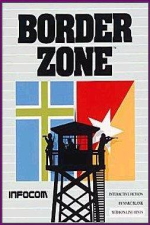 Border Zone is a classic text adventure game by Infocom. You play as 3 different protagonists in the game's 3 chapters, on different sides of an assassination plot. There is a real-time element to the gameplay.

Return to your compartment by walking east, north and west. Wait here, and when the inspector enters, answer no to his question. Continue to wait until you reach the station and are searched.

Now head east, south and west. Take the film and carnation. Walk east and south, then wear the carnation. Repeatedly walk north and south along the platform until someone says the correct phrase, then say "Popka Izim". Give the film to the contact.

Tear the clothes, and tie the scrap around your wound. Head northeast twice, then north, and northeast twice more. Wait here until the occupant of the hut walks outside. Open the door, go in and close it again. Get all, then oil the door. Wear the boots and the parka, then wait until the you hear the automobile being started. Open the door and go outside.

Walk northeast twice and southeast, then enter the swamp. Now go south, southwest twice, west, north 3 times, northwest, west and northwest to find a shed. Open the door and enter the shed. Get the binoculars, then search the tools. Wear the gloves and take the cutter. Go back out, then head north twice.

Open the pen and press the button (press it twice if you type slowly). Attach the pen to the northwest post. Wait until the guards are walking away from you and they are far away, then close the pen. Go up and climb the brace, then knock on the door. Pull the leg, then climb the ladder and enter the tower.

Walk southeast and look at the windows - note the location of the open windows. Now go west, north and west. Read the directory, and compare the free rooms with the open windows to work out the room number of the sniper.

Walk east, south 3 times, west and south to reach a shop. Approach Riznik, and note the password he tells you. Now head west, north, east twice and north. Call Topaz, then go north and topple the cart. Head west and take the can, then put it under the ladder. Stand on the can, then go up until you reach the floor where the sniper is hiding. Open the window and go north.

Now head north once you reach room F, twice for D or 3 times for B (depending on where the sniper is). Drop the matchbook, then knock on the eastern door. Say "password" (replace this with the password that Riznik told you). Hide behind the door, then wait here until Topaz arrives. Hit Topaz.