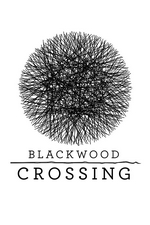 Blackwood Crossing is a surreal first person adventure game set primarily on a train with multiple dream-like episodes. There are 22 Steam Achievements, including 2 sets of collectibles: 9 movie posters and 7 toy bunnies. The locations of these are provided in the text below.

Pick up the game console from the seat in your starting cabin. Go out to the hallway and enter the cabin 2 doors down, then pick up the toy bunny (1/7). Go back out to the hall and open the door to the bathroom so that Finn can come out. Follow him to the next car, then start following his commands:

Look at the "Paper Whale" movie poster (1/9) on the wall, then start following commands again:

Look right into the room to see a strange bunny creature, then interact with it and you will wake up from a dream. Leave your cabin and turn left. Follow the series of bunny creatures, then open the cabin at the end and try to help Finn.

Leave your cabin again and head left to where Finn is talking to two people wearing masks. Talk to the grandma in the pink mask first, then the grandpa in the blue mask, and they will switch seats. Look at the "Finn" movie poster (2/9) on the wall. Now go through to the next cabin to find a "Gasp" movie poster (3/9). Continue a little bit further forward and inspect the emergency brake handle on the wall Pull the other one.

Now you need to walk around the cabin and find pairs of characters whose lines of dialog go together. Talk to the teacher Mrs Lyndhurst, then the boy in the yellow pig mask. Next talk to the woman sitting down with the lion mask, and the man standing up with another lion mask. Finally talk to the rabbit boy and then Cam (the older boy with the bag on his head). Now head through the next car to see the people all repositioned in their correct pairs. Proceed through the next door.

Go further along the train and it will transform into a lush garden. After Finn climbs up the tree, he says you need a password - you need to find 4 photographs to piece together the password. Take the first photograph from the back of the tree. Find the second photograph on a low table to the right. Inspect the guitar on the left Guitar man. The third photograph is on the right wall a little further along. Go forward again and enter a greenhouse Green Fingered. Pick up the final photograph on a shelf around to the right.

Go back to the front of the tree and talk to Finn, giving him the password "Bluback Wuboods Fubor Evuber". Now climb up the ladder.

Go forward to see a cutscene, then start looking around the room. Inspect a small trophy on top of a barrel in the corner of the room Prize draw. Turn right from here and inspect a toy cat on top of a set of shelves Good kitty. Now talk to Finn, and select to find the tape first. Go and pick it up from the nearby shelf. Talk to Finn again, then climb up the ladder and take the scissors from the small wooden stool. While you are up here, inspect the spinning light device on the floor You spin me right round.

Climb back down the ladder and talk to Finn again. Follow the on-screen instructions to help create the butterflies and then bring them to life Life Giver. Try to give life to the 3 broken butterflies. Eventually Finn will start a fire and you will end up back on the train.

Leave your cabin and follow Finn out to the left until he closes the door. Now turn around and go to the janitor's closet, where you can take a key from within a jacket pocket. Use this to unlock the door that Finn just closed, then go through. Inspect the "Hush" movie poster (5/9) on the wall to the left.

Go through to the next car to see the people repositioned once more. While you are here, check out the "Forgotten" movie poster (6/9). Proceed through the next door, and Finn will run away and close another door. Go up to him and talk to him through the door, then open the door and continue forward. Look in the cabins on the left to find a newspaper, a toy bunny (4/7), and a notepad Doodle dandy. Close the small sliding window outside the first cabin while you are here.

Continue forward and Finn will set your old belongings on fire. Use your newspaper on the fire to create a torch. Walk back with your lit torch into the previous car and use it to melt the lock on the fire extinguisher case (if your torch blows out, you forgot to close the window, so do this and then go and light the torch again). Pick up the fire extinguisher and carry it back to the fire, then use it on the fire to put it out. Look at the "The Storm and Revelation" movie poster (7/9) on the left wall.

Continue forward until Finn starts another fire, then walk into it and draw it up Fire Starter. Walk forward until you reach the brazier, then add your fire. Now climb up the ladder.

Enter the treehouse to see Finn start an explosion. Now there are two different achievements that you can collect here - the only way to get both in the same play through of the game is to quit immediately after receiving the first, going back into the game and getting the second:

Pick up a toy bunny (5/7) from the floor of the balcony outside. Now talk to Finn and you will end up traveling again.

Follow the grassy path around to the right. Turn right before you reach the statue and you will find another toy bunny (6/7) in front of a grave stone. Now turn around and go back along the grass, then go up to the gazebo and talk to Finn.

Leave the gazebo again. Head over to the right towards a boat house and pick up a paper chain from on top of a rock. Turn around and go back up the hill, then down to the right towards a small boat. Go just past the boat and pick up a piece of a fountain from in the long grass. Return up to the grave stone and inspect it now Alas, Poor Isaac!. Next go over and read the base of the larger statue Who's the daddy?. Look down at the ground near the edge of the rocks around the statue and pick up a part of a sundial. Go back towards the gazebo again, then head up the hill to the right. Enter the "folly" at the top of the hill Pure Folly and pick up a piece of a vase.

Return to the gazebo and talk to Finn to play another game with him. When you start counting, keep choosing the highest numbers possible: 1, 2, 5, 77, 351, 1000 Big Cheater. Now follow the rabbit boy into the cave and through the other side.

Turn right and inspect the "11 Rabbits" movie poster (9/9) on the wall Poster Club. Go towards all the frozen people in their chairs and approach the rabbit boy so that he disappears. Pick up the final toy bunny (7/7) from where he was sitting Not a happy bunny. Take the tape off the mouth of the woman with the lion mask.

Head back down the train carriage; when you get to where the tree disappears, turn right and slide open a window. Go all the way to the end, where your path is blocked by more of the dark umbra. Pull this and attach it to the nearby tree on the right. Grab it again from the left tree and pull it back to the next tree on the left. Grab it from there and pull it into the light near the window you opened.

Go to your grandpa, who will give you a plant. Go back to where the tree disappeared and use your plant in the ground. Give it life, then climb up the new ladder. Talk to the rabbit boy next to Finn, then climb another ladder. Go all the way back out of the cave.

Return to the campfire and give the homework report to the teacher, the model car to the boy, the pressed flowers to the grandma and the penknife to the grandpa. Go down the long corridor ahead and talk to the boy with the bag on his head. Go through the next doorway and draw fire from the torch, then walk forward into the darkness. Add your fire to the campfire at the end, then try to use the ladder but it is too high. Climb up with your dad's help.

Talk to Finn, then go out and interact with your mum to see she has a blank face. Go to the table and create a drawing, then pick it up and use it on your mother's face. Give her life to complete the game. After the credits, you will receive a gift on the train seat next to you Masquerade.