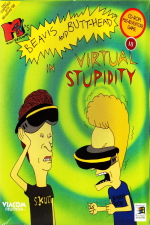 Beavis and Butt-Head in Virtual Stupidity

Beavis and Butt-Head in Virtual Stupidity is the first point-and-click videogame adaptation of the popular MTV cartoon. It is a traditional 3rd person adventure game with a series of associated arcade mini-games. Beavis and Butt-Head Do U is a second unrelated adventure with the same characters.

Pick up the stick and use it on the fan to stop it. Now grab the left ledge to play Hock-a-Loogie: Use your left mouse button to spit; the longer you hold the button the further it will go. Get 10 hits to earn a large green loogie. Use the right mouse button to spit this at the principal to win the game.

Now use the fan to exit the roof and go out the main doors. Here you will meet Leroy's gang before being able to leave.

Go home and answer the telephone, then pick up the magnifying glass. Next head to the park and talk to the man with the goatee about Todd and the gang. Enter the tennis court to play Court Chaos: Use your left mouse button to throw tennis balls at the players. Hit the squirrel on the fence to get rapid-fire ability.

Head to Burger World next and talk to the guy behind the counter, then go back to the park and examine the squirrel (twice). Talk to the man with the goatee with Butt-Head about food. Go to the Food Mart and head inside. Talk to the clerk about Todd. Try to take food from the glass case on the counter. Talk to Anderson about food and money, and he will leave.

Go to the Veterans Hall and talk to the army officer about Anderson. Now use the bucket to clean the tank, and talk to the guitar player about sperm whales. Try to open the top of the tank, but you are not strong enough.

Next go to the Coffee House. Talk to the blonde girl about money and a flyer. Return to the Food Mart and talk to the clerk about the flyer. Go to the left side of the park and use the trash can, then pick up the flyer from the trash and return to the Coffee House. Give the flyer to the blonde girl, then drink the coffee from all 3 cups on the tables, and pick up the book from the table on the far right. Talk to the guy in the brown sweater about more coffee, then use the coffee machine - Beavis will turn into Cornholio. Now you can go to the Veterans Hall, open the top of the tank and get inside.

Take the pillow from the bench, then talk to the guy on the bench about Butt-Head, then about the quarter. Now head right and take the towel and the basketball. Return left and enter the Insane Wing. Take the blocks from beneath the table, the teddy bear from te bed, and the camera from on the cabinet. Open the cabinet and take the car battery from inside.

Go back to your cell and give the blocks, bear and pillow to the guy under the bed. Pick up the flash, and combine this with the camera in your inventory. Go back out to the yard and use the camera on the guy on the bench 3 times to start a fight.

Use the keys to exit your cell again and go out to the yard. Pick up the quarter from the ground, and give it to Leroy back in your cell. Outside the jail, use your magnifying glass on the ant hill to the right to play Bug Hunt: Use your left mouse button to buy the insects with your magnifying glass, and your right mouse button to stomp the ground and kill them all at once. After the game, use your car battery on the guard and use the van to leave.

Pick up a wooden board and use it with your balls, then use it again to free yourselves so you can enter the slaughterhouse - you will end up back at home with Todd. Go back to the slaughterhouse and pick up the license plate from the ground. Go inside and take the steak, then turn the dial up to maximum and pull the lever. Pick up the axe, then leave here and go to the farm.

Talk to the farmer about Todd and the barn, then return to the Veterans Hall and talk to Anderson about Todd and the remote control. Leave here and go to the Taxidermist. Use the rabbit to get some string, and combine this with the gum in your inventory. Take a snake eye from the box on the left, then talk to the woman about roadkill. Take the woman's pen, then leave and return home.

Use your string and gum on the drain to get the quarter. Next head to the Coffee House and go to the bathroom in the back. Use the quarter on the condom dispensing machine, then pick up the condom. Head to the Food Mart and use the condom on the air pump (outside between the petrol pumps) to inflate it. Return to school and head inside, then give the condom to the cleaner and he will turn it into a balloon dog.

Head to the prison and give the steak to the dog, then use the balloon dog on it. Now use your wire cutters on the chain to free the dog. Pick up the hammer, then climb down the hole to return to your cell. Go out to the yard and then into the Insane Wing. Use the snake eye on the guy reading the book on the left, then talk to him to get the book. Go back to your cell and use the book on the guy under the bed. After he is taken away, pick up the teeth. Climb out the hole and leave the jail to the left.

Now go back to Burger World. Talk to the female customer about Todd and about her keys, then take her burger. Now you can go back to the kitchen and take the spatula from the bench. Head to the park again. Use your pen on the parking sign to the left and the car will leave. Now use your spatula on the dead squirrel, then use your hammer on the spatula. Pick up the squirrel and go to the Taxidermist again. Give the squirrel to the woman, then take the stuffed squirrel. Now talk to the woman about the bear.

Go to the Coffee House and talk to the army officer, then kick him so you are released. Talk to the man on stage, then use the microphone to play Air Guitar: just use the controls on the screen to record your own music.

Go to the Veterans Hall and kick the bear's stomach, then use the bear's bottom until the remote control falls out. Pick up the remote before heading back to school again. Go inside and talk to the cleaner about the locker. Give the stuffed squirrel to him, then go right into the gymnasium. Climb the rope, then use the towel on Beavis, and use the axe on the rope. Pick up the paint bucket beneath the sink. Open the filing cabinet on the right, and take a folder from inside. Leave the boiler room, and use the folder on locker 69 to get Todd's keys.