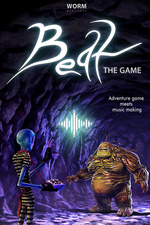 Beat the Game is a unique adventure blending exploration and music creation. You play as Mistik, a sound producer, exploring a devastated post-apocalyptic landscape and collecting sounds. As you collect sounds you can mix them together to produce a soundtrack for the game.

Go over and examine your hover bike, but it is broken. Examine the nearby soda machine and you will end up getting a soda. If you look in your inventory, you should see you already also have a balloon. A floating, winged eyeball will appear in the sky. Sit down in the nearby chair.

After a long sleep, leave the room and pick up a cassette from the ground just outside. Try going left, but you will be stopped with a message to come back at night. Go back the other way and climb up the ladder to return to the surface.

Turn on your map by pressing K, and then use your noise sampler by pressing N. Collect sounds from the various flying objects in the surrounding skies. Use your mixer by pressing M and select some beats until get the message "Kumadam liked your music". Now walk over to the large alien head and touch some purple goo on the ground.

After your hallucinations resolve it will be night time, and there will now be some angular creatures around the place. Scan the skies for new sounds. You should see two angular creatures next to a buried light post, but you will need 2 drumsticks to play here. Find the cat lady and pick up the crystal she leaves behind. Go towards the bottom left of the map and pick up a photo called whip from near a four-legged destroyed robot. Continue north and slightly east and pick up a drumstick from near a long cylindrical structure. West of here is a refrigerator - you can open and close this to change from day to night and back again.

Go to the northwest and find a second drumstick on the ground in front of a large display. Now go and examine the ball robot nearby (it is a yellow marker on the map). You will automatically insert your cassette and then be able to use the robot to quickly scout around and laser mark objects.

Continue east from here and find a sound studio beneath a large round structure. Walk in here to be told to come back once you have collected all sounds. You can also pick up some walking teeth from one of the benches, and another piece of paper called plan H. Look on the ground nearby for some more purple goo.

After another set of hallucinations, scan the skies for new sounds. It may help to select some more beats in your mixer, and you will get a night-time version of "Kumadam liked your music". Walk around the long tubes until you see the cat lady at the end of one, then walk there to get a new sound. Continue south and get another sound from near a dead guy sitting beneath a beach umbrella. Continue south to where you needed 2 drumsticks earlier and you will record another sound.

Make sure that it is night time, then go back to the manhole covering the ladder you climbed up, and head back down again. Go into the side room and click on the speaker for a sound, then go back out and to the far left to get another sound from Moss the Bassline maker.

Head back towards the four-legged robot and search around to find a floppy disk. Go and find a small stone block to the southwest of the sound studio, and you will automatically throw your crystal to generate a new sound.

Once you have collected all the sounds, use the refrigerator to change to night time. Go to the sound studio and play the mini-game. Just turn on and off the individual sounds as indicated by the purple boxes. Once you have become successful enough, a strange purple creature on wheels will arrive.