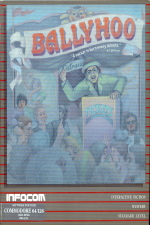 Ballyhoo is a classic mystery text adventure game by Infocom. You play as a concerned circus-goes who decides to investigate the disappearance of the circus owner's daughter.

Take the pole before heading north 3 times to the performance ring. Drop the mask here, then go up and east 6 times (you are safe because of the pole). Grab the balloon, then return west 6 times. Go down twice and get all, then walk south twice, west and south. Untie the balloon, inhale the helium, and say "hello" to the guard.

Now go south and west. Wear the mask and knock on the door. Go south and get the ash tray, then close the door. Search the ash, then take the scrap of paper you find and search the ash again to be discovered and kicked out. Read the scrap of paper, then go under the wall. Walk east, north, east north and northeast, then search the garbage to find a ticket - take it. Punch out the blue dot (as indicated in the documentation). Go southwest and south, then put the ticket in the slot and head east.

Ask the pitchman about Dr Nostrum's. Walk south then southeast and look in the cage. Get the keys with the pole. Unlock the door and open it, then go north and take the bucket. Next head south, northwest, north, west twice, south, west, south and east. Unlock and open the compartment, and take the whip. Walk north, east and north, and put the ticket in the slot. Go east.

Continue east twice more, then north and northeast. Get the stool. Now go northwest, south, west 3 times and north twice. Unlock and open the cage, then go west. Whip the smooth lion 3 times, then lift the grate and throw the meat in the passage. Exit the cage to the east, then return west and lower the grate. Search the stand and you will find and take a cigarette case.

Walk east, south 3 times and west, and give the case to Harry - he says it belongs to Andrew. Walk north and east, and put the ticket in the slot. Go east twice and south. Look at Andrew and Jenny. Show the case to Jenny, then give it to her.

Walk north twice and give the ticket to Rimshaw. Ask him to hypnotise you. Wait 4 times, then buy candy from the hawker, and give him money. Stand up, then go east, up, east, down, east, up, east, down and south. Stand in the line. Wait twice, then get out of the long line and stand in the short line. Wait 3 times. Get out of the long line (answer "yes"), then stand in the long line again - you will get a banana. Bite the banana, then drop it to get the monkey off your back. Walk north and ask the hawker about the candy. Return to your seat by walking up, west, down, west, up, west, down and west.

Stand up and walk south and west, then go under the wall. Search the garbage, then take your granola bar. Head south, east twice, north and northeast to the fat lady. Show the bar to Tina, then say hello. Shake hands. Go northwest and get the radio. Next head south, west twice, south and southeast. Drop all except the radio, then go north and take the headphones. Go south and up twice. Set the radio to 1170 (soothing classical music), turn then the radio off. Rewind the tape (wait once), then play the tape and wait until you hear Rimshaw's voice. Rewind the tape, then turn the radio on. Record, then wait 4 times before going down twice. Rewind the tape again, then turn the radio off. Get all, then drop the stool and bucket, and go northwest. Unlock and open the cage, then head west and play the tape. Now you can search the straw and open the trap door you reveal. Get the ribbon, then go east and close the cage.

Go southeast and get the bucket again, then go northwest, north, west twice, south and west. Touch the wood with the pole, then get the mousetrap. Drop the trap, then go east and wait. Go west, then east and west again, and catch the mouse with the bucket. Get the mouse and walk east, north and east, then put the ticket in the slot. Go east and south, and show the mouse to the elephant twice, then wait.

Go southwest and drop all, then go up. Turn the crank and look into the wagon, then knock on the door and go inside. Lock the door. Search the desk and take the spreadsheet, then move the desk and go up before Munrab enters. Go down again, then get all and read the spreadsheet. Now head west and ask Harry about Eddie Smaldone - it is Chuckles.

Go east, northeast and southeast. Slide the ticket under the front, then head east. Play blackjack here if you want to (just bet $2 repeatedly). Make sure you pick up the ticket again, then open the secret panel (you may be halted to play one last round of blackjack; if so, do it then open the panel again). Walk west, northwest, north and west. If Thumb isn't here yet, walk east and west until he arrives. Now go south, northeast, southeast and slide ticket under front. Go east and look under the table. Get the suitcase.

Now wait, then go west and drop all. Go up twice and wait to see a shaft thrust upward and withdrawn again. Go east, then wait again. Take the shaft and pull it. Now go down twice and get all except the key, whip and stool. Head northwest, north and west. Fill the bucket with water, then go south, northeast and north. Pour water on the detective, then ask him about Chelsea. Drop the bucket, and take the note and card. Read the note.

Now go east, south and up. Get all. Walk up, north, west 3 times, south, west, south and east to find Chuckles. Show him the tibbon, scrap, note and spreadsheet. Say hello to Eddie. Now show him the card, and he will leave.

Search the pocket, then take the veil. Wear the veil, dress and jacket. Knock on the door and enter the trailer, then close the door. Take the crowbar and move the moose to reveal a hole. Now open the door and go west twice, then open another door with the crowbar and enter the trailer here. Get Thumb, then go north and east twice. Put Thumb in the hole, then wait and take Chelsea.

Now go west, north, east, northeast, north, west and north twice. Clap, then have the roustabout get the net. Take off the veil, jacket and dress, then drop all. Go west and get the stand, then return east and drop it. Get the radio and climb on the stand. Go up again and turn on the radio, then drop it and go down. Get the pole, then climb the stand again and go up twice - this will scare Mahler on to the opposite platform. Get the radio. Now go east 3 times, then west 4 times. Drop the radio and pole, then go down.

The guilty parties will now enter and help. Walk south 3 times, then east. Call WPDL (the radio station that was asking for donations). Return west and north 3 times, then climb the stand and go up. Get the pole and radio, then go east 5 times. Wait 3 times to complete the game.