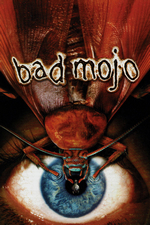 Bad Mojo sees you playing as Roger, a man magically transformed into a cockroach. You must survive your environment on a quest to become human again. The game was subsequently updated and rebranded as Bad Mojo Redux; the gameplay is unchanged but technical issues and graphical improvements have been made.

Once you gain control, head forward into the open tube and go forward to climb up through a grate into the basement. Head north until you see a black matchbook, then go west and between the oil streams to climb the leg of a heater. On the next screen you will talk to another cockroach - after the cutscene, go east twice (past the burner) and down the other leg. Once on the floor, go north between the traps to find a dead rat. Climb over the rat's body (don't go near the mouth) and head north again.

Go over the middle of the tail and head east to find a room with a spider. Quickly go and turn the cigarette butt around so the lit end faces the spider, otherwise you will be eaten. Now continue south twice and enter the Cockroach Corral. Walk over the dead roaches to cross to near the far side. At the last gap, push the larva north to form a complete bridge with the small roach, then exit the Corral. Climb up the workbench leg to the top of the table for another cutscene.

Head north 3 times, then east until you cross the vacuum power cord and it turns on. Go south, west twice and north, then climb down next to the cord. Go down and then across the cross bar to see the exposed part of the cord. Climb down this until it drops down and cuts off, then carefully climb back up to where the cord is plugged into the wall. Head east and climb along the vacuum hose until you reach the garbage bin. Crawl across the threaded cables until you reach the top right of the bin and can climb out again.

Go right on to the wooden table and go south once, then crawl on to the paint brush. Only go to the base of the bristles, then go through the small gap to reach the underside of the table. Head south one screen, then through the new gap, back to the top of the table. Go south, then east. Now climb along the brown stick to reach an electrical panel.

Head east to find a set of 3 fuses, then go up to see 4 meters. The first meter is stuck at 7, and the remaining tick over by crawling over the 3 fuses. Crawl over them until the numbers show 7-6-5-8, and the left fuse will short (you don't find out the correct combination for this until much later on, but doing this now saves a lot of time in the long run).

Climb down the broom handle to reach the floor, then crawl west to find a metal bed leg. Climb up and crawl over to the top of the bed (you want to be on the brown side, not the blue and white striped side). Head west to find a TV dinner, then crawl north over it to reach a desk. Climb the radio and head around to the back of it, then head to the top of the silver cathode to view a cutscene.

Crawl up to the top of the radio and knock the pill bottle to get a pill out, then push it into the can of drink and you will get another cutscene. Climb down to the floor beneath the bed and find a box of cigars. Crawl across this box and follow the other cockroach through the hole into the next room.

You start out on top of a towel dispenser - crawl down through the hole and push the lever on the right to release a stream of towels. Climb back out and then down the front of the dispenser. Continue crawling down the towels to reach the floor. Head south twice then west and you will see a rat in a rat hole. Climb up the brown section of wall just south of the hole.

Crawl up the wall and over the basin, on to the broken mirror. Crawl through the gap in the mirror to find a medicine cabinet. Now crawl up to find a slot for broken razors, and go through to reach the back of the cabinet. Head down to the cross-bar and push the screw to loosen it and knock some razors to the ground.

Climb back up through the cabinet and down through the hole in the basin to reach the floor. Now you can enter the rat hole safely. Head west and go through the new hole that appears.

Crawl along the copper pipes and down through the grille, then crawl down the front of the oven to reach the floor. Head west until you find the mop, then climb up the left side of the mop and all the way up the handle to the benchtop. Go east along the counter, all the way over the large butcher knife, then down the strip of bacon to the stove.

Head north around the pot, then south between the two pots. Push the beer bottle top south, then crawl over it and down through the hole where the knob is missing. Head along the pipe then turn left and slide the disc to turn off the flames. Go back out through the knob hole and then down on to the front of the oven. Head left over the small handle and down the far left of the oven. Go back up between the drips to get close to the baby cockroach - it will crawl on to your back.

Now go back up to the top of the stove. Crawl over the beer bottle top, then head east over the burner which is now turned off. Go around the top of the stove and back over the butcher knife, then all the way west along the counter. Keep going past the fish to find a garbage disposal. Climb on to the spoon, then west along the knife, which will tip due to your combined weight. Head around and down the garbage disposal.

You start this section on a bulletin board - crawl all over it and trigger a whole host of cutscenes. Go to the top right and crawl along the swordfish to its mouth, then crawl through the passages to see a message about cocktails. Crawl back out and down the bulletin board to the bottom left. Head across the bar using the baseball bat.

Head east until you reach a puddle of fluid, then climb on the peanut shell to get across. Push the small arrow on the Bartender's Companion to the far right to display the recipe for Bad Mojo. This is where you are supposed to learn the sequence 7-6-5-8, as well as the order of drinks.

Go back over the baseball bat and head right along the drinks counter. Climb the four bottles in this order: grenadine, curacao, brandy and vodka.

Crawl straight up on to the desk and on to the fax/answering machine. Press the play button, then reverse and play again to hear the messages. Head east and press the copy button to see that you are out of paper. Climb up the back of the desk on to a raised hutch, and connect the broken wires to start a fan blowing - paper will fall into the fax machine. Climb back down and press the copy button to print a series of pages.

After the cutscene, crawl down along the paper to the small table. Turn the cigarette butt around to stop blocking the remote control, then press the power button to see a message on the television across the room. Now head south over the passport and climb on to the butterfly to reach another part of the room.

Head west to see a glass insect case, then crawl down the power cord and the cat will pull the case and yourself on to the floor. Crawl west to the locket and view the cutscene, then return east and north, then climb the table leg to reach the table. Climb the wall and head to the top left into the vent.

Crawl around the shower rail and then down the pipe attached to the shower head. Head along the bottom of the bath tub to see a cutscene, then climb back up and through the vent again. Head east along the wall until you see a break in the cobwebs, then crawl upwards. Go through this vent to leave this area - the fan here was turned off with the shorted fuse at the start of the game.

Save your game. This next part is timed, and you will see an unsuccessful ending if you don't complete this sequence in time.

Save your game again. Now head back to your room in another timed sequence. Step on the locket next to your hand and you will save yourself.