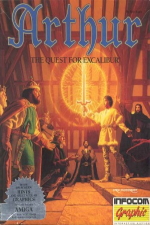 Arthur: The Quest for Excalibur

Arthur: The Quest for Excalibur is a graphic adventure developed by Infocom. You play as Arthur, and must retrieve the legendary sword Excalibur, which has been stolen by the evil King Lot.

Get the torque and examine it, then examine the crystal. Wear the torque. Now head east and pray, then return west to hear some voices (if you don't hear voices yet, go south and open the gate). Hide behind a gravestone, then wait. You will witness the sword being stolen, then will fall asleep and see Lot again the next day.

After the crowd leaves, get up, then go out and south. Ask the idiot about the invisible knight, then ask him about himself. Thank Floyd. Next go west twice, then southwest and the invisible knight will steal everything from you. Continue northwest twice to find Merlin's cave. After he tells you about the spell, head north into the cave. Take the bag, then look into the crystal ball. Go south.

You will be hungry some time around now, so head south twice into the kitchen. Try to take the cheese, but the cook won't let you. Examine the bird, which is chattering at you. Wait until the cook leaves, then CYR owl. CYR human, then open the cage and get the key. Unlock the cupboard and open it, then take the bottle and cheese. Go north to return to the tavern. Eat the cheese, then listen repeatedly until the people talking lower their voices.

Head north, east and south to the Smithy. Examine the hole, then CYR badger and go down. Push the stone, then go east and CYR human. Ask the prisoner about the guards, then get the stone and hide behind the door before calling the guards. Wait until the guard enters and has his back to you, then hit the guard with the stone. Take the helmet and key, then unlock the prisoner and give him the helmet. Walk north and east twice, then move the tapestry and go east again. Walk north twice more, then wait for the bells, and you will overhear a new password (given as a verse and line number from the following poem:

No worthier warrior was before
Lot became Lord of all the land:
with sword so sharp and shield that shines...
proud Paladin beyond reproach.

He husbands heavy chests of treasure,
the envy of every earl and king.
His soul is stirred by precious stones and silver,
and gleaming gold which daily he doth gather.

No king so fair
by maid begot
was ever there
than good King Lot.

Head south 4 times and you will find a fire. CYR salamander and head west. CYR human again, then look in the barrel, then push the barrel to put out the fire. Get the stone, then open the door and go northwest, then south into the Armoury. Wear the armour and take the shield. Polish the shield with the stone, then drop the stone. Walk north and west, then say the password that you just overheard. The prisoner will tell you the location of a hidden sword, and will then leave.

Go south and get the bottle, then go north and west twice. CYR badger again, and dig in roots. CYR human and get all, to claim a sword. Now travel west, north, northwest and north to find a knight's pavillion. Knock on the door and you will be challenged to a jousting contest. Mount the horse, then select a lance (either red or green). During the joust, always protect your body and aim at his body, and you will win an ivory key.

Walk north 3 times to find an ivory tower. Open the door with the key, then head down into a dark room. CYR owl, then go down again and read the wall to see the message "SAYMOTHER RIOTHAMUS". Go up, CYR human and get all but the key. Go up 3 more times, then CYR salamander and go west through the crack in the wall. Read the wall to see the message "AMHTIR AMU SMOTUS". Return east and CYR human, then open the door. You are asked to guess the old man's name - the two phrases you have seen are the clues. The first tells you which letters to substitute in the second. Any time you see an R, replace with an S; when you see an I, replace with an A, etc. Doing this, you work out the man's name is "Thomas The Rhymer", so type this in to receive a ring. Wear the ring and thank the man, then open the door, get all, go down twice and open the door again.

Walk south twice, then northwest twice. Try to go north, but a hail of conkers will stop you. CYR turtle, then pull in your head and feet to protect yourself. Wait until the hail stops, then CYR human and get all. Go north to find some tiny footprints. Hide behind a rock, then listen to overhear someone complaining about boring food. Go out and drop your bottle of spice, then hide behind the rock again. Wait until the leprechaun is reading the writing on the bottle, then grab it, and you will be rewarded with some whisky.

Next head south, southeast and north to find a chasm you cannot cross. Return south, southeast, south twice, southeast, south and southwest. Rub the ring and you will see the invisible knight's pavillion. Go east into the pavillion, and the knight will offer your items back. Answer "yes" to his question, and you will be given a riddle to solve. The correct answer is "th" (the pattern is 1st, 2nd, 3rd, 4th, 5th). Get all (including the egg), then put all in the bag. Walk west, southeast and east, and note down the list of items the Red Knight requires before he will let you pass.

Return west and head south, then CYR eel and continue south and east. Look through the window to see the Lady of the Lake, then return west and head southwest. Examine the kraken to see a golden bracelet, and the rowboat to see Excalibur still in the stone. Zap the kraken, then go northeast and north into the shallows. CYR human, then get the word and cut the tentacle with the sword - the bracelet drops into the water. CYR turtle and go south, then swim through the bracelet. Go back north, then pull in your head (or you will soon choke) and CYR human. Wear the bracelet.

CYR eel again, and head south, southeast and northeast. Note the tasty-looking minnow here. Continue north 3 times to reach a ford, then CYR human. Walk east, northeast and up into a dragon's cave, then walk north twice to get hints about how to get past the dragon - it wants some alcohol, but you couldn't bring the whisky with you as an eel. For now, head down and southwest, and take the apple (which is rotten). Go west to the ford and CYR eel. You will drop the apple, but it will float downstream. Go south 3 times, southwest, northwest and north, then CYR human and get all.

You will meet a Black Knight and if you try to go east he says you must fight him. Fight the knight repeatedly until he drops his sword, then cut the medallion with your sword and he will vanish. Now get the whisky and drop the bag. Go east twice, northeast and up, and give the whisky to the dragon. Wait until it passes out, then go north into the cave. Go northwest and point your shield at the basilisk to turn it to stone. Continue northeast and you will be told to say "Nudd" to continue. Try this, but the room is too hot. Return southwest and southeast, then head northeast to a very cold room. Say "Nudd" and catch the words as they freeze in front of you. Quickly go southwest, northwest and northeast, and the words will melt so you can head through the door.

A girl is manacled here - kiss her then kill her and a demon will reveal itself. Say "yes" to his proposal. Take the fleece and the key. Unlock the left manacle, the lock it again. Unlock the right manacle, and you will be cursed and expelled from the room. Cut the dragon's hair with your sword. Head down, southwest and west twice. Get the bag, and put the fleece and hair in the bag. Go back through the bog (easy if you use the map), then head southwest twice, south, southwest, southeast and east. Give the tusk, hair, egg and fleece to the red knight.

Walk south twice and unlock the door with the silver key. Go down to see where Nimue is being held. Wait until Christmas Eve, and when you are told you are getting sleepy, sleep. When you wake you will be hungry. Go up, north twice, west and south twice. CYR eel, then head south, southeast and northeast, and eat the minnow. Return southwest, northwest and north, then CYR human.

Go north, northwest, northeast, east 3 times and south. CYR badger. Go down, south, up, down and up to reach Thorny Island. Get the sprig, then go down, north twice and up. CYR human. Get the sprig again, then go north, west 3 times, southwest, southeast, east, south twice and down. Wait until Christmas, then sleep when you are sleepy. When you wake, get all. Note that you are hungry again. Wait until the flower blooms, then touch nimue with the flower. Take the gauntlet.

Now go up, north twice, west, northwest, northeast and east twice. Give red glass to Floyd, and he will give you a dead mouse. CYR badger, eat the mouse, and CYR human again. Get all, then go east 3 times. Slap Lot with the gauntlet to challenge him. Fight Lot. Drop the bracelet, then fight him again. Spare his life, then call Nimue. Walk south and take the sword.