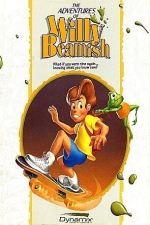 The Adventures of Willy Beamish

The Adventures of Willy Beamish is a comedy point-and-click adventure from Dynamix. As the titular character you must save your town from an evil threat, and there is an in-game timer to make sure you stay on your toes throughout the game.

Try to go outside, but Coach Beltz will see you. Show him your hall pass and you will enter the bathroom. Say you don't think you have anything for Spider, then give him your Game Buddy. Sneak out of school and you will end up at home.

Take the report card from the mail slot in the front door of the house, and you will meet your grandfather's ghost. Go inside and meet Duffy the dog, and take him for a walk. Once you are done, head forward into the kitchen to see your mum. Talk to her and agree to take Brianna outside. In the garden, when given the option do not push Brianna much harder. Back in the kitchen you will cut yourself - head back out of the kitchen and upstairs.

Go into the bathroom (far door) and look in the left cupboard. Use the Germ-Away first, then put a band-aid on the injury. Leave the bathroom and go to Tiffany's room (second door on the right). Adjust her scales on the floor, then steal her diary from her desk on the right. Now head to your bedroom and get some Nintari practice. It should be time for dinner, so head to the dining room.

Enter Brianna's room (on the left) and help her back into bed. Go to your bedroom now and take the jar of flies from your desk, then get into bed.

Downstairs, get breakfast for Brianna and Duffy, then agree to wash your dad's car. Leave the house and go to the treehouse.

In the Pizzeria, pay the photographer to take a photo of you with your friends. Once Spider grabs you, select the first option and he will let you go to the bathroom. Take the no-smoking sign then try to leave and Spider will come in. Give him your comic, then leave.

After the conversation, leave here and go to the park.

Go to the fountain and look in it - take 1 token from the water (if you take a second you will get arrested). Now go to the T-shirt kiosk and talk to the vendor, then give her your photos with your friends and you will get a t-shirt made. Look at the lottery machine here and press the blue button, then take the lottery slip.

Give Dana the t-shirt and she will agree to take Gigi to the competition. Wait here until you get a message that it is time to go home (you can fast-forward time in your inventory).

Head inside and meet Alicia, your new babysitter. Follow her into the kitchen, then go to the dining room. Once she turns into a bat you will run into the living room. Run upstairs and get some hairspray from the bathroom, then spray the bat (right-click until the target icon comes up). Next go to Brianna's room and grab the dead mouse, then head back to the living room. Click on the vacuum to hide behind the couch, then put the dead mouse on the table. When the bat goes down to investigate, right click to bring up the target again and suck up the bat.

Downstairs, watch an argument about the car crash, then leave the room. After the cutscene, take Duffy for a walk. Go to the kitchen and feed Duffy, then go to the living and talk to Brianna, agreeing to push her on the swing again (once again, not too hard). Leave the house and head to town.

Head towards the ferry, then when you are stopped, give the man the token you took from the fountain. On the ferry you will take a photo of a Japanese family and be rewarded with some weapons!

Head to Tootsweet HQ at the bottom of this part of town, and visit the booth on the left to get 2 entry forms. Next go to the Golden Bowl bar. Keep talking to Ray, the security guard, until the street gang arrives. Throw your smoke bomb at the gang, then use your wrench on the fire hydrant, and run away. Go straight back to Tootsweet HQ. Talk to the Japanese family and say the gang is going to clobber you, and they will protect you and take you home.

Go up to your room and unlock the Nintari with the key, then go to bed.

Downstairs, there will be another argument. Head to the kitchen and feed Duffy. Go out the front of the house, then leave.

Talk to Dana, and she agrees to follow you to the jetty.

Go to the ferry and you will head across the water.

Go in through the front door and talk to Arthur the parrot, using options 1, 2, 1, 2. Now head into the dining room on the right. Take the cup off the table, then pick it up from the ground, and take the tablecloth from the table. Return left to the entry hall and put the tablecloth under the suit of armour, then knock over the suit. Pick up the helmet and the blueprint - read it to see the order: brown, purple, green, purple. Go right twice to find the kitchen.

Throw your cup at the cook to distract her, then sneak to the part of the kitchen just behind her. Take the pan from the bench and pour its contents on the floor between the large pot and the cook. Now slide the pot towards the cook. Go to the back area of the kitchen and jump up to the carousel holding the frogs. After the cook falls into the pot, cover her head with the helmet. Press the right button to free the frogs, then leave the kitchen.

You will end up back at your jetski - go to West Frumpton.

Look at your jetski and take the recorder from the front. Head to the Union building and climb in through the window on the left. Try to take the security pass from the desk, but Louis comes in. Pick up the plunger and use it on his face, then take the pass and leave. Outside, use the payphone. Put your recorder on the ledge and press its record button (red circle), then put the phone on the recorder. Dial the astrology hotline number (432-7446) and after the messages, press the record button again to stop recording, and hang up the phone. Put the phone back on the recorder again and dial the number for the Golden Bowl (342-3403). After Ray answers, press play on the recorder.

Go to the Golden Bowl and head inside - Ray will be on the phone. When the bartender asks you to leave, quickly give him your lottery ticket. After the numbers are announced, take the nude calendar from the bar and you will leave automatically.

Next go to the Sludgeworks. Talk to the striking workers and give them the calendar. Try to go through to the factory and you will be stopped - show your pass to the security guard, then go inside. Run straight to the control panel. Open the cover and flip the power switch. Press the colored buttons in the order from the blueprints: brown, purple, green, purple. Now when the guards are on the platform, move the joystick to the left and they will fall into the sludge. Run to the next room.

Go to the console in this second room and flip the power switch, then type AIR to get rid of the guards. Next type TRAM to reach the next room. While running on the conveyor belt, click on yourself to duck - do this to avoid getting hit by the henchman's hat, then pick up the hat and throw it at him. Jump right on to the red platform, then get into the tram. Now as per the blueprint again, while in the tram you need to go straight, right, left, straight, left.

In the final room, grab the yo-yo from your inventory and use it on yourself. Right-click to get the target up and throw the yo-yo at Leona. Now jump over and press the toilet's flush to get rid of her and save your dad.