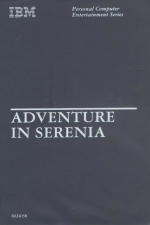 AKA Wizard and the Princess

Adventure in Serenia is one of the earliest graphical adventure games; it is a text adventure with rudimentary graphics, developed by On-Line Systems, the company that would later become Sierra On-Line.

Go north and drink water, then go east and take the stick. Now whenever you see a rattlesnake, just use your stick to defend yourself. Go west and north, then use your stick. Look in the hole and get the note. Continue north and west, then lift the rock to learn the magic word "HISS".

Go north and take another note, then go east and get the locket. Open the locket and look at it to see the word "LUCY". Walk east, south and west twice. Look in the hole and take the cracker. Now go east, north twice, west, north, west and north to reach a chasm. Look at your note, drop the note, and look at the other note: together they form the word "HOCUS". Drop the second note. Say HOCUS.

Go north and east, then take the apple. Walk west and north. Look at the gnome and he will steal most of your possessions. Go north and fill your flask, then go north again. Go up to see the ocean, then go down and east. Say HISS. Enter the crevice, then go south 3 times. Get all (your stolen items from earlier), then unlock the door and open it. Continue south, then up, then through the hole. Walk east and north, then give your cracker to the parrot and take the vial. Walk south and west 3 times. Give your bread to the lion, then go north and take the rope. Enter the boat and use your blanket to plug the hole. Go north twice, drink some water, then go north and east 3 times.

Exit the boat, then go east and north twice. Get the anchor, then tie rope to the anchor. Walk west, then through the rope and go up into the treehouse. Take the shovel. Go down and south twice, then dig. Open the chest and a pirate will steal it. Walk east, north and west, then enter the cave. Open the chest, look in the chest, and take the harp. Walk north, east and north. Drink the vial, then fly north.

Walk north and take the ring, then continue north and west. Follow the rainbow, then take the coin before continuing north. Say LUCY (all your items will disappear). Now you can safely go west over the bridge, then continue west and north. Enter the cave and get all. Exit the cave, then go south and west. Play your harp and the giant will leave you alone. Go north twice and buy a horn. Go north twice more. Blow your horn, then go north into the castle.

Go west twice to find the throne room. Look at the throne and you will be teleported to a courtyard with a boar. Give your apple to the boar.

Now go north and east and look at the cabinet to be teleported again to a small empty room. Try to open the door here but it is locked. Pick the lock with the knife, then open the door. Go east, up, down and up again to see a bird. Rub the ring and you will turn into a cat and eat the bird. Go down and east, then kiss the frog. Walk east twice, open the closet and look in the closet. Get the shoes and look at them to see the word "WHOOSH". Wear the shoes and say WHOOSH. Talk to complete the game.